Exclusive! is a two player area control card game using an innovative scoring mechanism. In it, players are journalists at rival newspapers, competing to write the best articles on ongoing current events. Each round, players take turns playing numbered cards of three different suits to stories, and the player who has the higher total of cards at that story gets points. However, at the end of the round all cards of the most common suit are discarded, so players have to play carefully and strategically in order to not lose everything they’ve built up!

As the sole designer for the game, I was responsible for:

Exclusive! was created for a Tabletop Game Design class at my university. The game is based off of a previous game that I had completed for an earlier class that was mildly successful, and I saw this as an opportunity to take the game from alright to amazing.

Early in development, my biggest focus was on making this game as elegant as possible. This is what led me to the current scoring system, where the most common suit is discarded at the end of the round - it adds lots of opportunities for players to form short- and long-term heuristics and creates many interesting decisions. It’s a mechanic that worked well from the very first tests, creating surprisingly emergent gameplay with only one rule.

However, focusing on elegance as my main design pillar started to hold me back: I didn’t want to add more of what players wanted out of fear that it would make the game more complex, resulting in a game that worked, but was only somewhat fun at best. I realized that I needed to pivot - I looked at what parts of the game players most enjoyed, and propped those up as new design pillars alongside elegant gameplay, and further expanded on those pillars. As a result, players’ overall rating of the game spiked, and allowed me to explore new, innovative ideas that I was preventing myself from considering previously. ​ 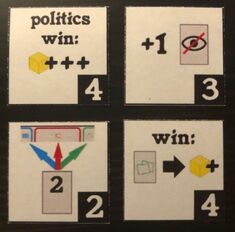 The biggest issue with the game for a big chunk of the iterations was that nearly all players were reporting that at some point during the game, they felt that they had no chance of winning, drastically reducing player engagement. I realized that there was much more tension in the game than excitement - the stress of playing and bad feeling of losing outweighed the joys of winning, causing players to have a negative outlook on their place in the game.

To fix this, I created “Witness Tokens” - special abilities that players can win alongside points in the game, creating an additional source of excitement for winning during the game. This helped a lot to make players feel better about their position in the game (and became one of players’ favorite parts of the game), but didn’t fix the issue completely. Eventually, I realized that scoring victory points simply wouldn’t work as the victory condition - it meant one player would always be objectively behind during the game, making it easy to assume you have no chance to catch up. To fix this, I completely revamped the victory condition, where players battle for control over three different tug-of-war tracks. Testers with this version have stated that they always felt they had a chance to win, fixing the problem!
Want more details? You can download the design docs here, which contains competitive research, reasoning for each iteration of the game, the current rulebook, and playtest results.