Froggy’s Farm and Friends is a 3D farming game made in Unreal Engine. Plant seeds and water them to get crops. Use your crops to make potions that can help you in various magical ways, or turn your crops into Essence, which can be used to expand your farm and uncover secrets.


I was the third person to join the team after the first two members split off from a different student team, using the previous team’s prototype as a basis for our game. Unfortunately, most of the game was written in C++, which none of the team members knew and didn’t have time to learn, so we had to be creative in order to get our ideas implemented. Eventually, we gained four more team members including programmers and an artist, who really helped bring the game to life. 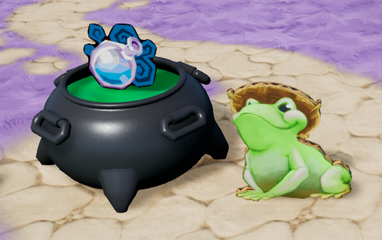 When I was brought onto the team, I was in charge of revamping the existing potion system, which was used by the previous team as a puzzle mechanic. I decided to make the potions all help the player with farming in different ways, allowing players to choose potions that best support how they want to play the game. To do this, I created 6 different potion types inspired by the crops in our game and got feedback from players as they were used, improving those that players found weak and creating new effects to replace ones that lacked appeal. By our final playtests, every potion had a player it appealed to, and those players went out of their way to use them.

One major technical limitation here was the crafting system itself - every potion could only cost two crops, and I didn’t have the C++ know-how to change this. To help give me more control over the costs of the potions, I made some potions require the player to meet particular conditions in order to use the potion. This effectively created an additional cost to the potion outside of the crafting system, allowing me to better balance the potion powers.

Speeding Up the Tutorial 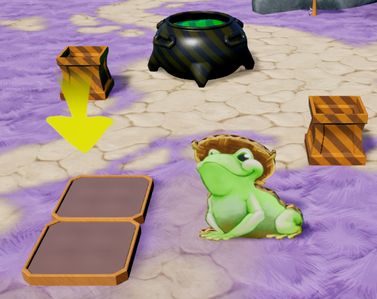 Later in development, after reviewing playtests with the design team, I noticed that it was taking players an average of eight minutes just to get through the tutorial - if they completed it at all. This was due to the tutorial coming in the from of a “Quest Log” HUD text element, which had several problems: it provided no visual signifiers to indicate how the game is supposed to be played, didn’t restrict players from using game mechanics that they hadn’t learned yet, and most importantly it was easily perceived as something that could be ignored and most players chose to do just that.

To fix this, I proposed several possible solutions in a meeting and implemented the ones that got the best response from the other team members. One added element was locking interactable objects, preventing the player from using mechanics they haven’t learned about yet, therefore reducing confusion during gameplay. Another element I added were large arrows in the world space that pointed the player to where they needed to go to complete the next tutorial step, guiding players along and confirming to them that they’re in the right place while also reducing the need to read text, making the tutorial feel less like work.

After implementing these changes, testers went from an average of eight minutes to complete the tutorial to about two minutes, which is exactly the result I was hoping to see!