Catan is potentially the most popular board game of the last 30 years. In it, players are settlers on the island of Catan. You start with just two Settlements which generate resources for you, and you can spend those resources to build roads, create additional Settlements, or upgrade your Settlements into Cities which produce even more resources! Each of these structures gets you points, and the first player to 10 points wins the game.

Despite its popularity and its status as a good game for novice board gamers, Catan has some elements that aren’t particularly accessible to beginner players. The biggest issue in this regard is during the setup of the game, where players are asked to place down two Settlements anywhere on the board to start their civilizations. Many experienced players say that this is the most important decision of the game. Asking a first-time player to make the most important decision of the game when they have no experience to base their decisions on makes it very likely that they will start in a losing position that will make them frustrated during the game. 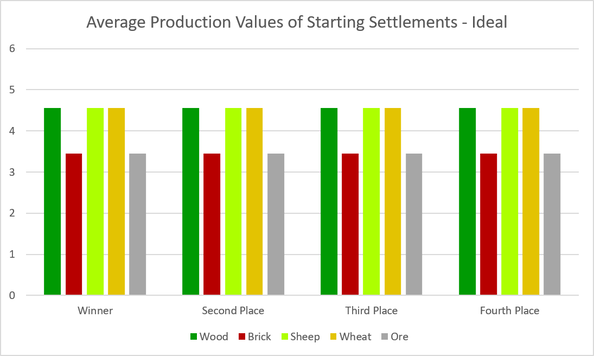 (Note: Brick and Ore are lower than the other resources because there are fewer of those resources on the board)
However, after running the simulation to play 20,000 games of Catan, the actual results look like this: 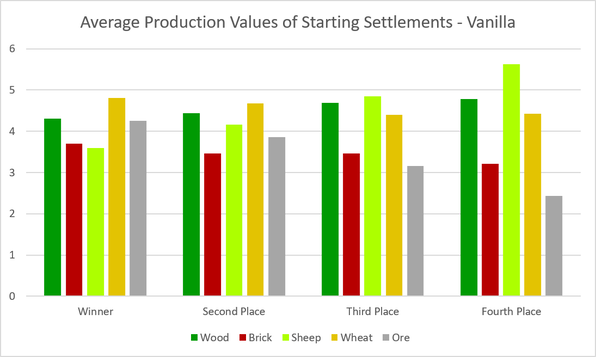 From here, my goal is to somehow change Catan to make the final output of this graph to look as close as possible to the “ideal” graph shown above, but to do this in a way that doesn’t fundamentally change the player experience and could ideally be easily implemented for those who already own the game.

I decided the best way to do this was to change the costs of the various buildings - doing this would give me lots of control over the value of the different resources without adding any new rules. I did this via iteration and manual evolution on the cost structure: I looked at the data, identified which resources were strong and which were weak, adjusted the costs to weaken strong resources and vice versa, ran the simulation with the new costs to create new data, then repeated this process with the new data until the graph looked like the target graph.

During this process, I remembered noticing earlier that winners built a lot of Cities, vastly increasing the value of Ore (as Cities require a lot of Ore to build). Since there’s not a lot of Ore on the board, players that were able to lock down what little Ore existed were able to build more Cities, and building more Cities gave them access to even more Ore which resulted in a snowball effect. To combat this, I made Cities require a variety of resources to build, and reduced the variety of resources to build Settlements in order to keep resources balanced. This should make the most powerful building still expensive but not exclusive to a minority of players.

After nine iterations, I eventually landed on a cost structure that produces the following graph, which is the closest I could get to the target graph: 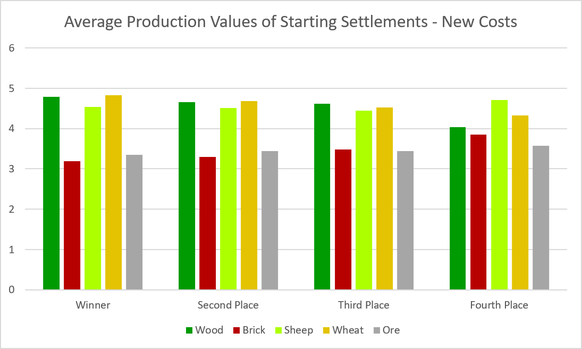 Although this doesn’t perfectly match the target graph, first through third place are very close! Having as similar graph between all players indicates that the starting Settlements weren’t the deciding factor in the game, solving the issue with beginners choosing potentially worse positions. Here’s the original cost structure and my new, beginner-friendly cost structure:

There’s a few additional benefits to this solution. It maintains the idea of “going for” certain resources if you want to pursue a certain strategy (go for Sheep if you want Settlements, go for Ore if you want Development Cards) while reducing the chance of any particular resource being a necessity. It brought the length of game down from an average of 16.98 rounds to 13.68 - many people feel that Catan is too long of a game, so this should speed it up by about 20-30 minutes.

There are a couple potential downsides to this solution, however. Firstly, it increases the value of the Largest Army bonus potentially too much: with the normal cost structure, 19.5% of winners had the Largest Army bonus, whereas under the new cost structure 57.4% of winners had the Largest Army bonus. This is likely due to Ore functioning mainly as a cost for Development Cards (which is how you get the Largest Army bonus), and players who do well end up with an excess of Ore near the end of the game. This could potentially be offset by adjusting the contents of the Development deck to be slightly less valuable. The second potential downside is that it reduces the space for mastery within the system: preventing the player from making large mistakes reduces the amount they can grow and learn over many plays. This could be addressed by treating the new cost structure as a “beginner variant” to make the player’s first experience easier, and then on later plays they can use the original cost structure for a more competitive and difficult game.