Spy Moles is a roll-and-write game where players are moles tunneling underground, attempting to make the best secret base for their spy organization. However, instead of a normal pen, you use an invisible ink pen to mark your sheet, challenging you to remember where you've already marked - at the end of the game, you shine a blacklight on your sheet to see how well you did!

As the sole designer for this game, I was responsible for:
Spy Moles won the 2022 LUCI Award for Best Casual Game, and was featured in the Fall 2022 issue of Casual Game Insider. It received a "fun" rating of 94% from players at the 2022 ETX Convention.

Spy Moles was created as a side/passion project while I was attending college. It was developed on and off over the course of about two and a half years when I could find time for it. The design is approaching completion, and after some additional polish and content design I will begin searching for a publisher. 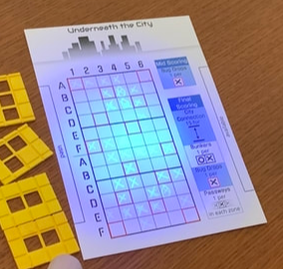 ​One of my goals with this project was to make a memory game that didn't turn adults away, and kept them coming back for more. While I was doing research during preproduction, I read up on the psychology of memory and mental imagery. I realized that the memory mechanics that pushed players away had a large focus on testing their Semantic memory, where players have to recall specific pieces of information they were given during the game. To make Spy Moles more welcoming, I made it so players are never asked to specifically recall any information during the game and are instead rewarded points for remembering their previous actions, so players are far less likely to have moments where they feel dumb.

To keep players coming back to Spy Moles, I made the core structure of the game revolve around a "final reveal", where players turn on their blacklight to see what they've done, but only at the very end of the game. This means the most exciting and engaging moment always happens at the very end of the game, and often makes players immediately want to try again. Interestingly, I found the best way to make this reveal as engaging as possible was to make the scoring conditions include ways to lose a lot of points in the case of a mistake. This almost-push-your-luck approach made players who complete the goals feel good by getting a lot of points, but it also made the players who failed the goals feel good as it made their failure funnier, so the game ends on a high note either way. Under this system, players reported wanting to paly again much more often. 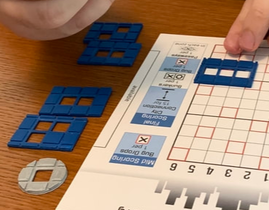 A big pain point that persisted for a majority of Spy Mole's development regarded what players did on their turn. Each player was allowed to make two adjacent marks on their turn, but many players only made one. I realized that it was difficult for some players to remember what they were allowed to do on their turn given that they also had to use their memory as the core challenge of the game. Despite the turn rules being pretty simple to begin with, I realized they had to be streamlined further. I had also found during testing that other players wanted more excitement on their turn, as those who understood the rules found them too basic. I had two conflicting problems to solve here!

To solve both these problems, I came up with a "stencil" mechanic. Each player is given five stencils with different Tetris-style cutouts. On each turn, each player chooses on of their stencils, places it on their sheet, and makes a mark in each hole revealed by the stencil. This solved the complexity problem, as I was able to remove the need for players to actually remember how they were supposed to make marks - the component itself guides the player so they don't have to remember. Additionally, adding the Tetris shapes added more depth to each turn, as players had to weigh which piece was best to use on a given turn. Because of this change, player engagement went up significantly!